Get fresh music recommendations delivered to your inbox every Friday.
We've updated our Terms of Use. You can review the changes here.

Nothing Left But Light 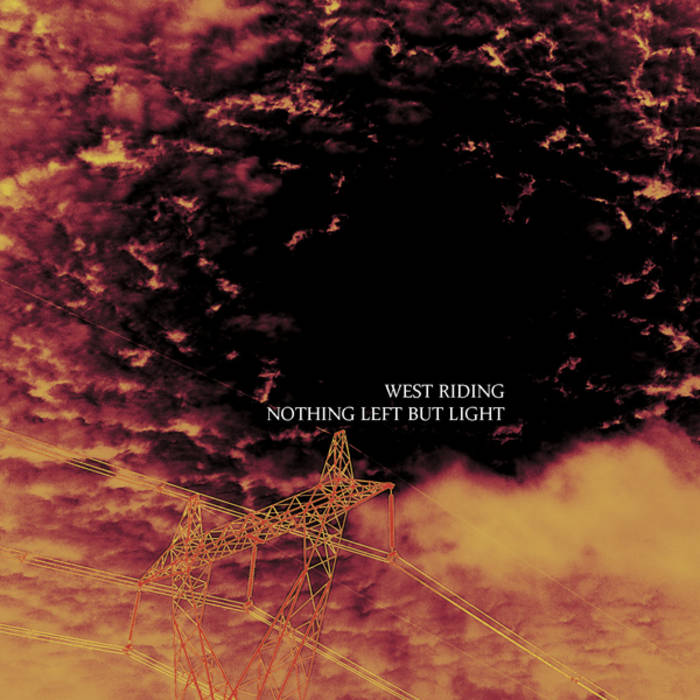 For most artists, music is an eternal quest for a certain sound, a certain vibe, a certain evocation of emotion and reaction. For many of us, it's a lifelong journey that never sees a destination.

With "Nothing Left But Light," composer West Riding has created an album that is free from convention yet still accessible. It is a collection of sounds mysterious yet strangely familiar, an organic work that evokes an image of distant memories buried beneath a sort of sonic haze. Melodies are fleeting, harmonies wandering, and rhythm (if detectable at all) exists mostly as a faint pulse under the layers of sound. The song titles themselves lend only a blurry definition to what must be a much deeper yet untold story. The listener is left with the impression of someone trying hard to remember events that occurred long ago, images that have been distorted by years of noise from other, more recent or more visceral memories, and as one thought slips from their grasp, another fades in to take center stage.

Built almost entirely from organic sounds (child's toys, household items, simple musical instruments, found sounds and field recordings) that were stretched, crushed, flipped upside down and stacked on top of one another - over which were superimposed more recognizable sounds such as trumpet, piano and vocals - "Nothing Left But Light" shows West Riding's determination to avoid being labeled an 'electronic' artist, whether that goal was deliberate or not. He also manages to avoid easy categorization in any of the myriad sub-genres of modern instrumental music, qualifying as none of the labels ambient, experimental, drone or noise but simultaneously incorporating elements of them all.

The record also obtains its fleeting, half-recognized quality from the technique used to create it, what the composer calls "asynchronous improvisation." Improvised bits of melody or sound are stacked, then other improvisations are simultaneously recorded on top of them, and the whole mess of disparate ingredients mixed together into a final structure that is obviously not contrived, rather was arrived at by chance. In fact, West Riding has admitted that what the song was "about" did not occur to him prior to constructing a piece, nor did it occur to him in the early stages of composition; rather, the true nature of the track would only appear once the basic themes had been created, long after it was possible or logical to manipulate the piece without scrapping it entirely and starting over. And consequently, the titles found on the finished product were somewhat of an afterthought, and only after repeated listening sessions of his own did West Riding discover unintentional facets to the songs that supported the theme of the chosen title; as if the tracks had been composed in reverse yet were just as meaningful as if he had intended to sit down and write a piece about Slovenian lakes, highways at midnight, or an aging person revisiting the past during their final July in this world.

While this description may make the album seem unlistenable, quite the contrary is true - for all the randomness and use of manipulated sound, for all the fuzzy and seemingly careless methodology, the album is a fragile and beautiful collection of highly emotional and meaningful music, the kind that is best listened to intently, late at night, with the lights off and the headphones on. In fact, the album appears to have been recorded specifically with headphone-listening in mind, as many of the tracks seem to swirl and bounce across the stereo spectrum, revealing details that cannot be observed so well from standard speakers.
The listener may observe that the album seems to take an upwards arc from track 1 through track 11 - starting simply on "From Bled to Bohinj" and "The Last July" with a pensive piano melody joined by warm pads and passing sounds, then gradually working up towards the more complex layers and earthy rumbles of "Over Aurora," "Goodbye, Paris" and the title track, taking a slight detour for the simple road movie theme of "88 Feet / Second," then back to stacks of buzzing layers with "The Unmentionable Times," the epic and grandiose splendor of "Where Waves Grow Sweet" and "Revenant," and finally completing a complete 180-degree turn with the mechanical noise of "Goslings So Like Stones" and "Young Machines." And then, like the denouement in a cinematic drama, the aptly-named "Epilogue" brings us back to a place of splendid sweetness that ends too soon and seems unfinished.

And from this the title of the album perfectly sums up the entire experience, from the creation of a single track through the listener's observation of the finished product - West Riding's attempts to strip away the norm, discard conventional wisdom and practice, and create something truly original has left us with nothing more than the basic essence of his creative and emotional self.

All compositions, sounds and images by James M. Gregg (BMI) except...

Bandcamp Daily  your guide to the world of Bandcamp